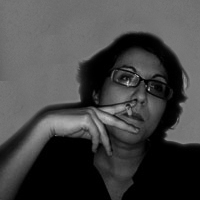 Since 1996, Valentina Tanni spends most of her time websurfing, writing, smoking, drinking and moving from house to house. Always in multitasking mode. She has a killer pet named Ozzy. .

DEADLY SARCASTIC, ESPECIALLY IN THE MORNING